Guilty Crown has been on my radar for a very long time. Being an anime series directed by the same man behind anime greats such as Death Note and Attack on Titan, I was certain that Guilty Crown would be a series that I could get into and really enjoy. Unfortunately, my enthusiasm for the series dwindled the more I watched.

Guilty Crown first released in 2011 as two separate volumes, however recently, the series has been re-released as a complete series collection. The series follows Shu Ouma, an average high school boy who accidentally stumbles into the conflict between the corrupt government organization known as the GHQ and the resistance group known by the ominous name, Funeral Parlour, who work to restore Japan’s independence. Caught in between, Shu inadvertently gains the ‘Power of the King’, an ability to pull out and use a person’s ‘void’, a weapon which stems from their hearts and inner self.

Guilty Crown’s pacing is slightly haphazard. The series delves right into the action, leaving viewers intrigued and wanting more, before cutting back toward a slower pace and dragging the story on in an effort to build the world in which the characters live, as well as their relationships with one another. Throughout the first five or so episodes, confusion and some frustration with the pacing of the anime can be evident, as it certainly was with me. I didn’t care for the challenges Shu faced with the pop singer, Inori, who mysteriously entered his life and with whom he quickly became infatuated by.

Despite some frustration at the initial slow pace, the plot certainly thickened as Shu progressively became more involved with Funeral Parlour, upon learning Inori’s part in the group. His power certainly became apparent to the GHQ Antibodies, soldiers who used brute force and violence to stamp out members of the public who might possess or be carriers for the dangerous Apocalypse Virus that had caused terror and devastation in Japan ten years ago. Working with Funeral Parlour meant that Shu’s once mundane and ordinary life took a whole new turn. 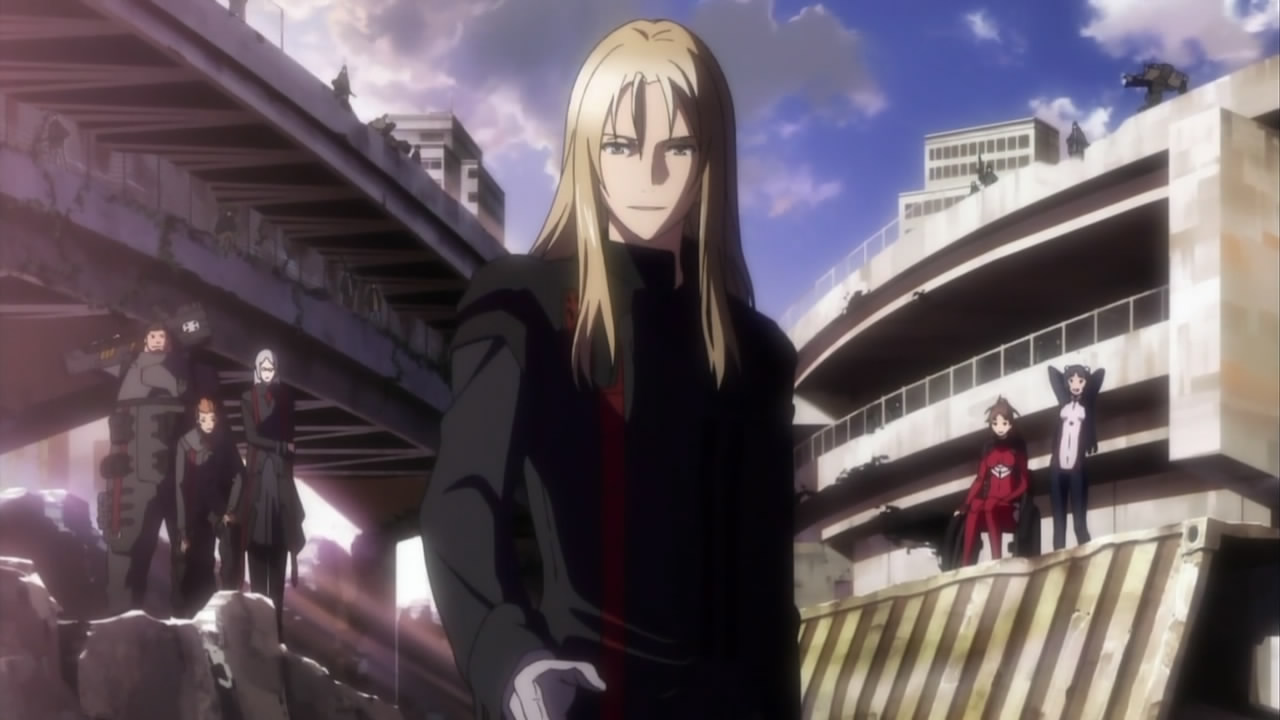 It was at this point that I really started getting into Guilty Crown’s story, wanting to learn more about the Apocalypse Virus and how it tied Shu to the GHQ’s secret agendas. However, what I found was just more distractions to the central narrative and the most exciting part of the story. These distractions were typical of high school anime of this kind and I should have known that there would be moments of unnecessary fan service. The one thing that was highly uncomfortable and just so incredibly unnecessary is the loose, uninhibited and rather flirtatious behaviour of Shu’s mother toward him. Stumbling about in her apartment half-naked and embracing him in ways that just didn’t seem normal for a Japanese mother to do, yet alone any maternal figure. The entire mother-son relationship felt more like that of siblings, and even then, Haruka Ouma’s behaviour would be off-putting.

Of course there was plenty more of the high school longing and jealousy as Shu struggled to come to grips with the charming and confident way Funeral Parlour’s leader, Gai, commanded attention, especially that of women. It’s easy to forget during crucial and intense moments that Shu, Inori and his friends are all merely high school students and that they are allowed to feel childish emotions.

The rest of the anime is much of the same, with the story progressing slowly while more and more questions are raised. Eventually the truth is revealed and while satisfactory, does not do the hours viewers have already invested, the appropriate justice. In fact, the climax of volume 1 felt rushed and essentially happened all at once within the last few episodes. While it was a mind blowing experience in terms of action, the truth behind Gai’s determination to free Japan, Inori’s part in the entire ordeal and the background behind the Apocalypse Virus, all felt like one massive brain dump into a handful of episodes. To be honest, it felt as if the creators of the anime had no real plan with the direction of the initial arc and simply crafted reasonings at the end to effectively bring that arc of Guilty Crown.

This all changed as soon as the second arc began as the characters were now more fleshed out, most of the earlier questions have now been answered and the series was able to simply kick off without a hitch. Shu and Inori’s relationship now holds much more importance and the emotions behind their feelings for one another become more apparent. Even the action sequences seem to have much more finesse. The plot of volume 2 is gripping and together with volume 1, there’s is a bit of a Code Geass type feel to the anime, which led to my enjoyment of the series.

Where certain aspects of story may have been lacking, Guilty Crown is a visual and musical masterpiece. The character animations were easy on the eyes and were not completely bizarre and unrealistic as some animated features can be. The scenery depictions of the futuristic city in which the characters live was also marvelous and highly detailed. The soundtrack was equally on point and urged the story forward, adding an air of emotion to character interactions and epic heroics in battle scenes.

Guilty Crown may not be the most well written anime series and certainly doesn’t come close to the likes of Death Note and Attack on Titan, it is an anime series that definitely has the right idea and one that has some redeeming qualities. For those who have the time to truly invest into the series, Guilty Crown may strike your fancy, though you will need to sit through rather lacklustre episodes and give it a chance first.