Overlord is an anime series based on a light novel of the same name. Adapted by Madhouse and distributed across Australia and New Zealand by Madman Entertainment, the series consists of a completed first season with a second coming soon.

The anime tells the tale of what becomes of the last remaining player of Yggdrasil, the hugely popular Dive Massively Multiplayer Online Role Playing Game (“DMMORPG”), after the game serves shut down. The last player, Momonga, was the guild leader of Ainz Ooal Gown, one of the strongest guilds within the game, which consisted of 41 members. Upon the cessation of the Yggdrasil, Momonga finds himself still trapped within the game, unable to utilise the normal player functions to contact other players or quit the game. Thus, he takes on the name Ainz Ooal Gown as a message to other Yggdrasil players, who may be stuck in game like him, and begins to explore the new world that he is trapped in.

Overlord shares many similarities with other anime, such as Sword Art Online, wherein a player becomes trapped within a game and must work to solve the mystery behind their imprisonment. The anime’s plot is interesting and relies heavily on the characterisation of Ainz Ooal Gown (“Lord Ainz”), who is portrayed as the supreme overlord with unparalleled power and strength. Due to his immense power, there is some similarity between Lord Ainz and Saitama from the anime, One Punch Man, who also was ridiculously powerful that no one stood a chance to defeat him.

The natural development and showcase of Lord Ainz’s power leads the anime series and allows him to endear himself to viewers, like me, who bear witness to his greatness with awe and amazement. The anime is clever in using two very different voices for Lord Ainz; one, his ‘real world’ voice, which we come to understand as his innermost thoughts, and two, the domineering voice of his in-game character.

Despite being a supreme overlord who is incredibly impressive, his mere presence commanding power and respect at every turn, Lord Ainz is likeable and illustrates his love and compassion for his guardians and servants, along with a kindness that one would not expect from such a powerful being. It is both amusing and eye-opening, the way his guardians and servants pledge to remain loyal to him to the bitter end and long to be in his company. The odd ‘love’ one of his guardians has for him makes for some humorous and oftentimes uncomfortable moments.

Along with characteristics which portray ultimate power, Lord Ainz’s appearance also speaks volumes of his abilities. With such a bold and domineering presence, it’s no wonder that he was chosen to be the supreme overlord of the guild. It’s also no surprise that his guardians and servants all fawn over him, desperate to serve their great and powerful master. 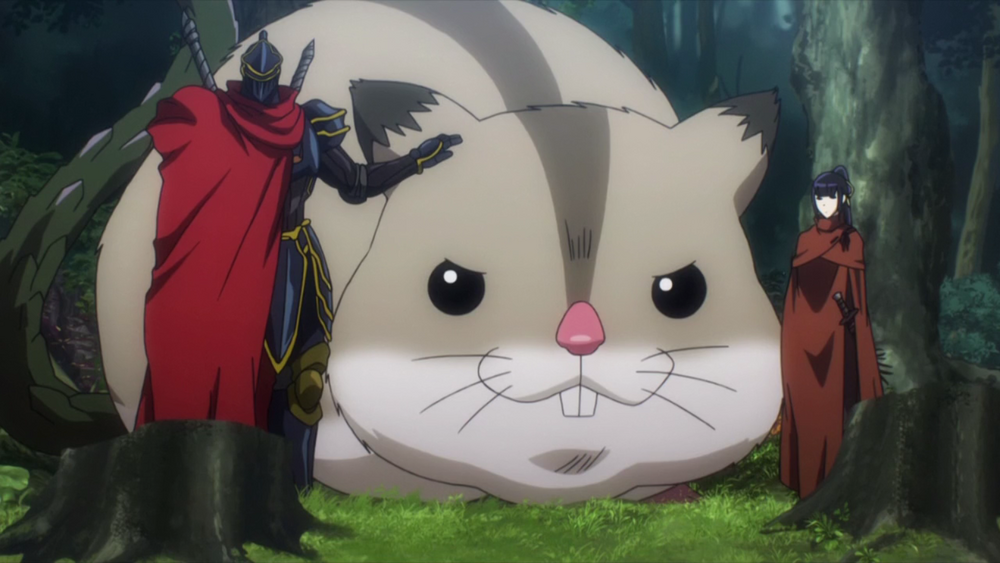 While similar to Sword Art Online, watching the anime did bring about a longing to jump into games like World of Warcraft or The Witcher, having been hyped up via the anime. Thankfully, each episode ends brilliantly, leaving us wanting more from the story and desperate to know the truth about why Lord Ainz became trapped.

The battle scenes are incredible, with brilliant sword fights and magic duels, which are followed by epic music. Watching Lord Ainz use his abilities to defeat those who we believe might be stronger than him is enchanting and magnificent. It’s extremely satisfying to be kept in suspense right to the very end, which is exactly how Overlord progresses. Granted the end of the season leaves us with some questions but we’ve learnt enough from season 1 to know what to expect in season 2.

Visually, Overlord is filled with bright colours, brilliant animations and an in-game scenery that leaves much to be desired. The various armour and attire worn by Lord Ainz is magnificent, as are that of his guardians. It is slightly peculiar though that the Dark Elf siblings are depicted as cross-dressers, though this is no way a judgement of any kind. Rather, it was simply unexpected and was confusing initially to uncover which one was female and which male. That being said, both were undeniably adorable yet over-powered in their own right.

The soundtrack was as epic as the series itself, with dark undertones that set the mood of the anime. However, despite the catchy soundtrack and incredible music, it was disappointing that this music drowned out much of the dialogue of the anime, which made certain crucial moments inaudible.

Nevertheless, Overlord is an intriguing anime and one that I will be recommending to other anime fans. With such an incredible character and a troupe of valuable side characters, I can’t wait for season 2. Here’s hoping that Lord Ainz discovers the truth about his situation, before it’s too late.