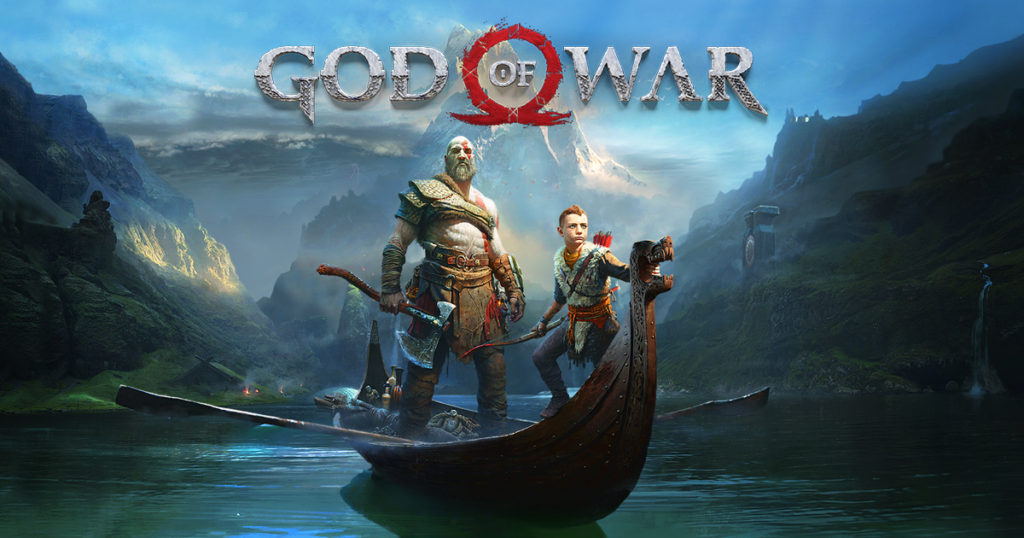 A highly rated game worthy of accolades is often rare and hard to come by. To achieve critical acclaim, a perfect balance must be struck between each individual facet which make up the game. Sony’s Santa Monica Studios does just that with it’s latest release, God of War.

Having not played much of the previous God of War games, I wasn’t sure whether the game would tick all the boxes and consist of all the elements which make a video game fun and exciting. How wrong I was to doubt it. 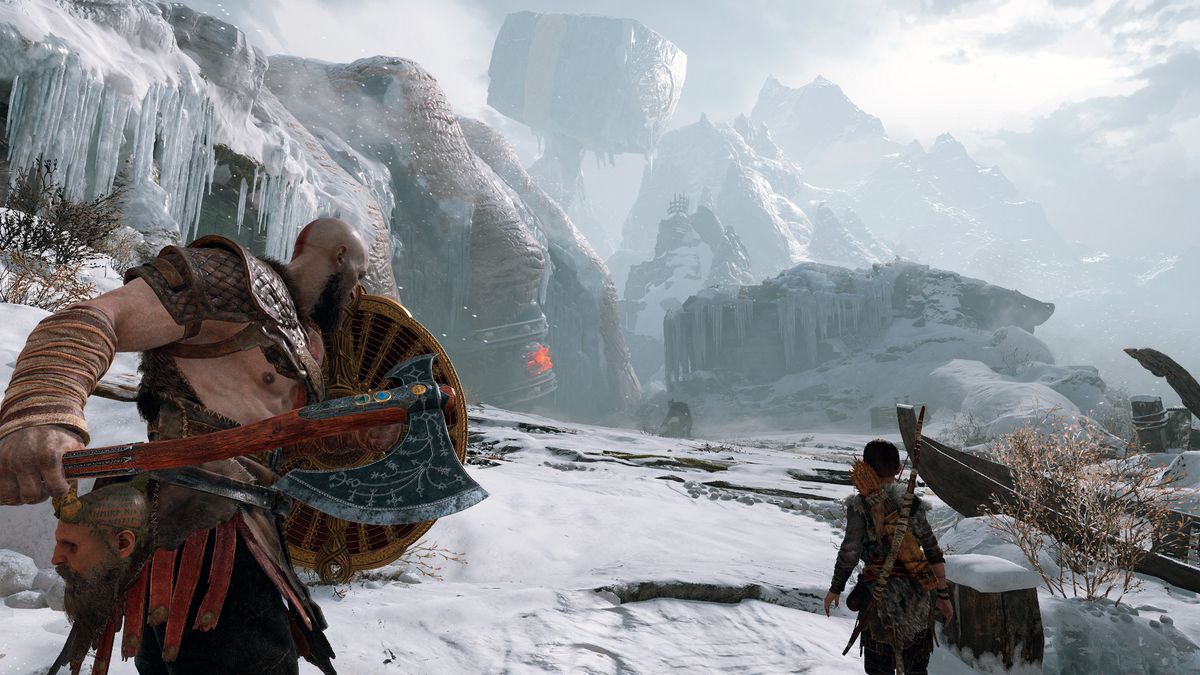 This iteration of God of War is unlike its predecessors, acting as a sequel to the main protagonist, Kratos’, story while also being a complete re-imagination of the series. Here, Kratos is no longer the demigod filled with burning rage. Instead, he’s left Olympus and chosen to live out his life in the quiet serenity of Midgard with his wife, Faye and son, Atreus.

Being set in Midgard, the game naturally follows Norse mythology as opposed to the traditional Greek mythos and opens with a rather sombre tone, with the burial of Kratos’ wife, who seemingly passed away from natural causes. Left to raise his son alone, Kratos takes Atreus on a journey to fulfill his wife’s final wish, which was to scatter her ashes from the highest mountain top in the land. 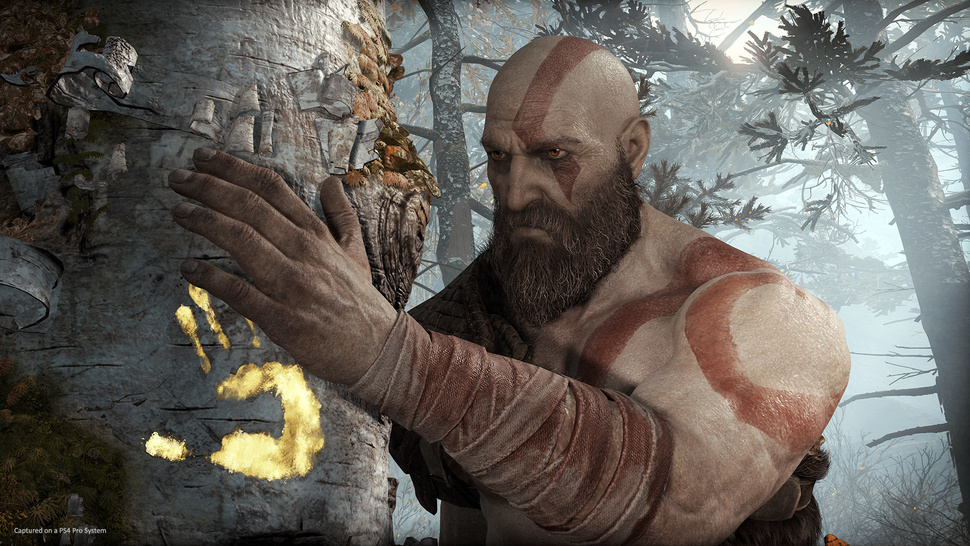 The journey, of course, proves challenging. Not only are the pair attacked by various entities, from monsters to Norse Gods themselves, but Kratos must also deal with his inner turmoil, overcome his past shortcomings, and teach his young son how to survive in the unforgiving world in which they live.

Despite having a whole new pantheon to tear through, this version of Kratos isn’t fazed or interested, a complete deviation from the character we’re familiar with. We are given an insight into this new, more melancholic and serious Kratos through his powerful silence and restraint, which speaks volumes, while Atreus, on the other hand, does most of the talking, determined to win his father’s respect and attention. 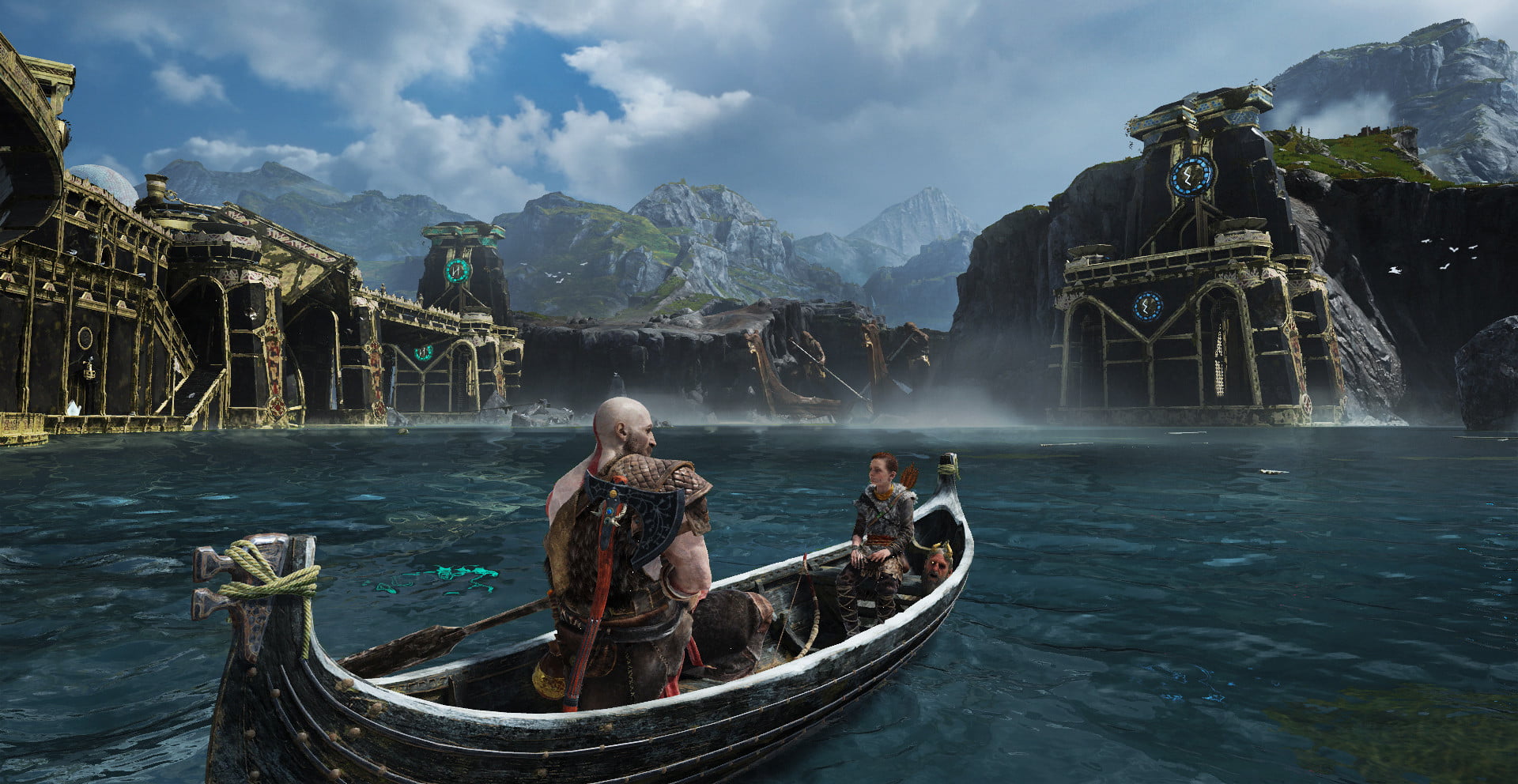 The strained father-son relationship is poignantly evident right from the get to, from which we learn that Kratos is hiding his past from everyone, including his son, who, as a result, feels like an unwanted burden. There are underlying emotions buried deep, which can be felt through the pair’s interactions. Kratos may not be father of the year, however, the cinematography detailing his controlled expressions are more than enough to determine the great deal of care he has for his son.

The first battle scene, wherein Kratos and Atreus fight a large troll, alludes to the reasons why Kratos is silent and harsh toward his son. The rage that Atreus displays after defeating the troll is enough to suggest that Kratos is simply worried that his dark characteristics may run through Atreus. He’s merely trying to prevent the boy from becoming like his nasty old man. 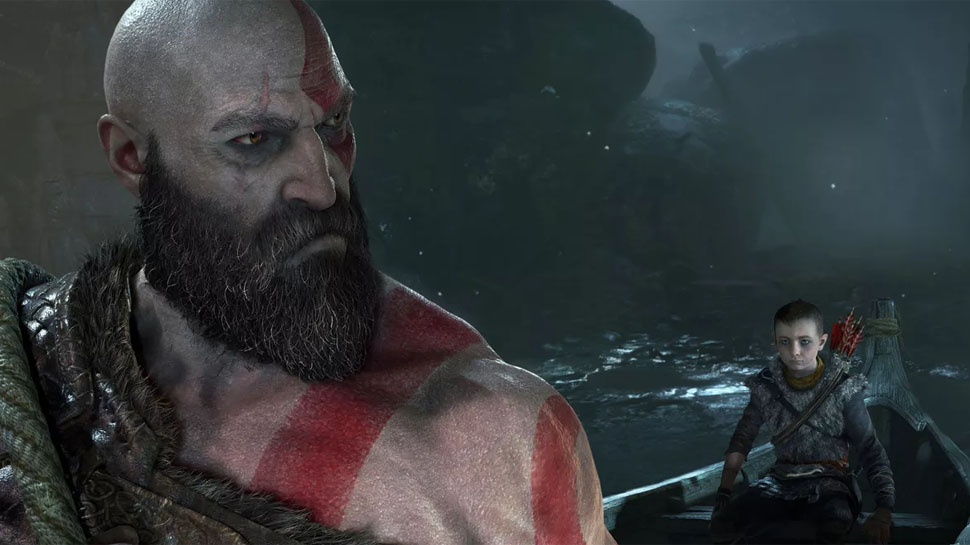 The narrative of God of War is certainly more in depth and drawn out compared to previous iterations, with a much slower pace that may be off putting for some. However, this slower pace comes at a fantastic payoff, telling a story that transcends other games.

Of course, the narrative wouldn’t be complete or hold much impact without the absolutely breathtaking visuals and beautiful soundtrack provided in the game. Santa Monica Studios have done a glorious job at providing clear cut cinematic scenes, gorgeous scenery and a level of detail unlike any other, complete with a musical score that adds to a sense of allure and enjoyment of the game. Watching cut-scenes was like watching a film, only this time, you’re in control and the level of detail in the characters and scenery provided a fantastic sense of time, place and tone of the game.

On another note, Santa Monica Studios managed to also do away with the dreaded loading screen, which allows for an unique sense of flow, whether playing for long sittings at a time or in short bursts. It’s clear that the developers of God of War wanted players to truly appreciate all that the game has to offer without interruptions or distractions. 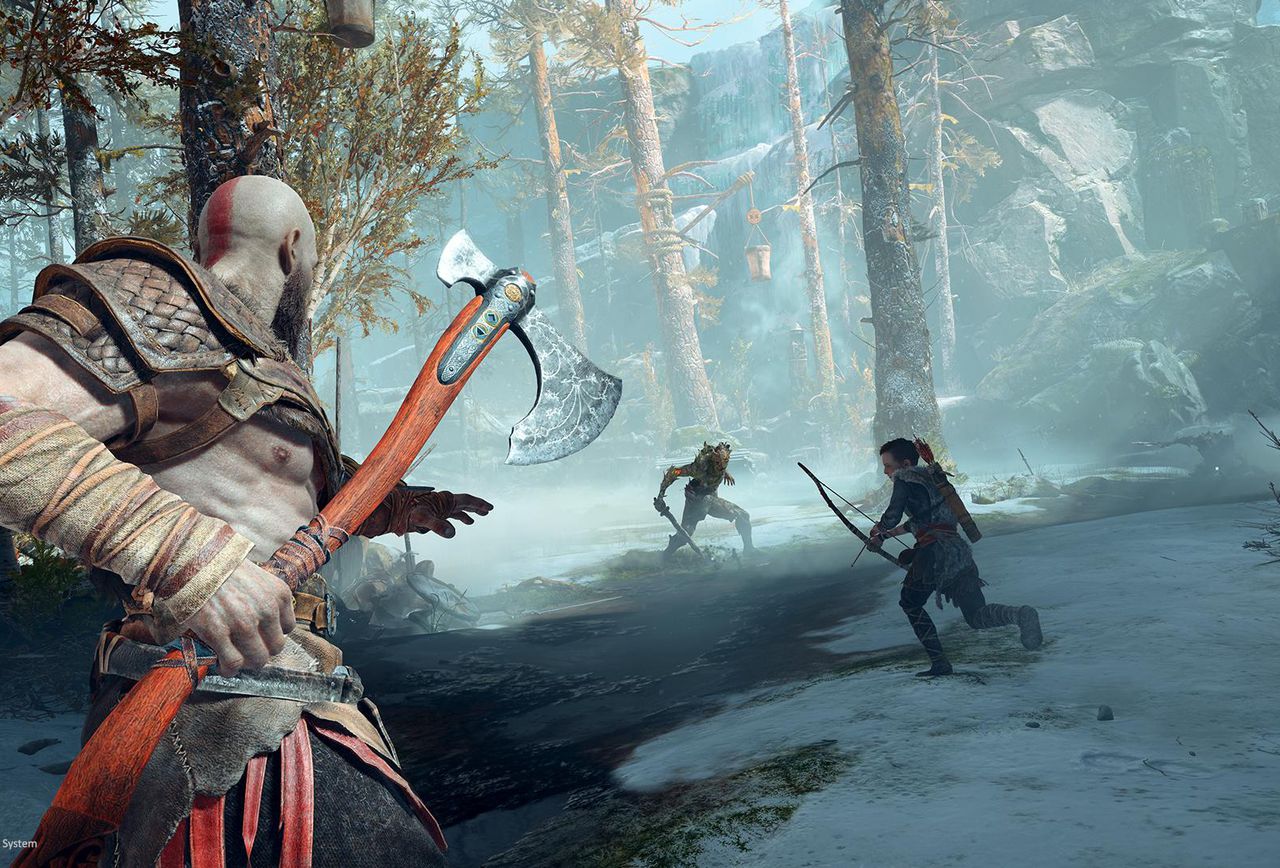 In terms of gameplay, God of War is refreshing, yet challenging. Combat is complex, with a significant amount of buttons to push, a variety of surroundings to constantly keep watch for, and the range of difficulties in fighting enemies. It certainly takes a lot out of you, which can be quite a task for beginners. Thankfully the game comes with several levels of difficulty, from easy to ‘Give Me God of War’, for those who prefer experiencing the game on a whole other level.

In this game, Kratos uses a Leviathan axe, which not only deals damage in close contact but can also be thrown to stave off enemies further away. In addition, Kratos does also possess a shield for defence and is able to attack with his fists as well, which make for some awesome combat scenes.

Combat is made more interesting with the addition of being able to signal Atreus to shoot arrows from his bow to distract enemies. However, it is easy to forget that this option is available while concentrating on dodging and fending off enemies. It does prove helpful, though, as the game progresses as Atreus’ skills increase and he’s able to take out lower level enemies single-handedly. 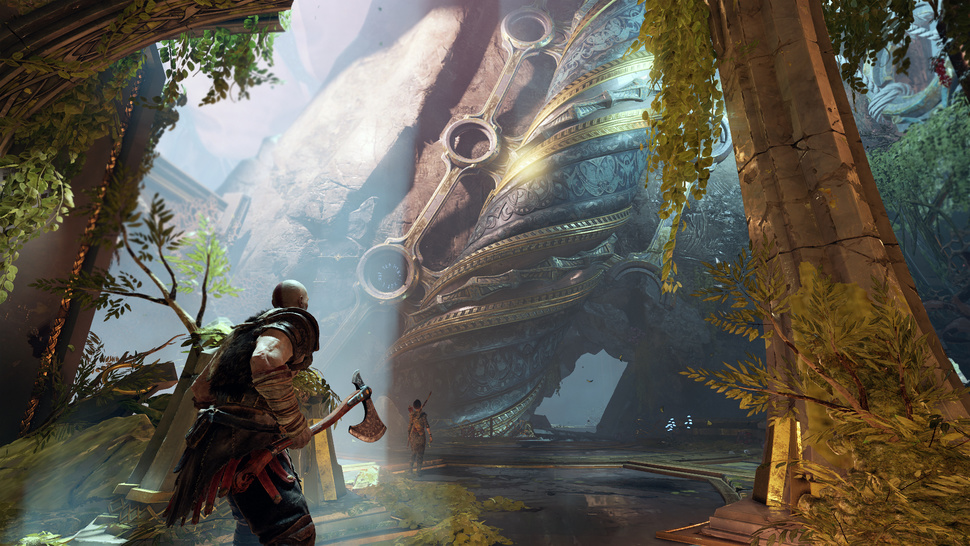 This kind of melee combat makes for a fun experience that players are thrown into very early on in the game. What makes God of War, all the more entertaining in terms of gameplay though, is the addition of decent puzzle solving and exploration. When not fighting off powerful enemies, players are required to solve various puzzles in order to progress through the game, which allows for more depth when it comes to gameplay, something that puzzle-game lovers will truly appreciate.

Another facet of the game which allows for more complexity is the ability to upgrade weapons, armour and skill. However, it’s important to note that higher level equipment doesn’t necessarily make it better. Players are required to assess each piece of new equipment and determine whether it will provide any benefits when in use. This, again, adds a fantastic new layer to game. 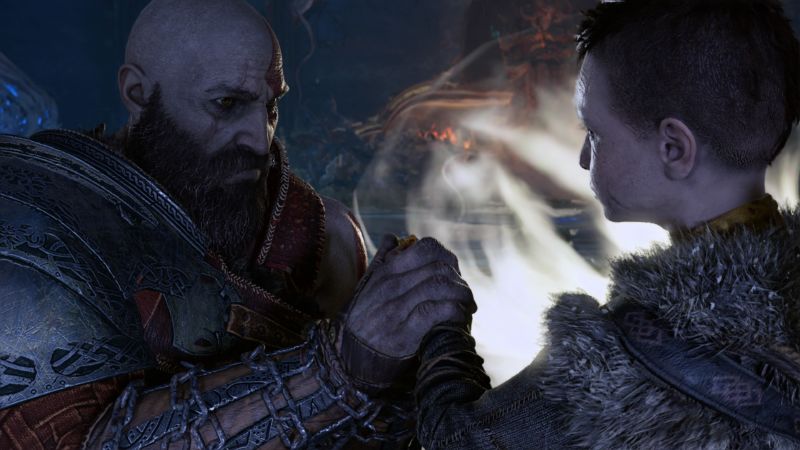 God of War isn’t your run of the mill 10-15 hour game. There’s plenty to see and do, resulting in a game that’s far larger than the main campaign. Players can easily lose more than 30 hours engaging in side missions and hunting for collectibles, some of which allows for leveling up weapons, armour and XP. In this way, the game provides a solid amount of bang for your buck.

Sony certainly has a potential Game of the Year Award winning title in God of War. With such a perfect balance struck between story, gameplay, visuals, and soundtrack, the game offers more than just action and adventure. Instead, the game provides a holistic experience that will have players feeling immensely satisfied, yet wanting and yearning for more. God of War is certainly a masterpiece and is one that will certainly go down in history.