A decade ago, if you had asked me who I thought would be best suited to team up with Nintendo’s iconic character, Mario, Ubisoft’s Rabbids would be one of the last on the list of candidates. Now, in 2017, not only has Mario teamed up with the wacky bizarre creatures, he’s also the star of a turn-based, tactical RPG and even wields a gun!

Mario + Rabbids Kingdom Battle is Ubisoft’s latest title, developed for the Nintendo Switch and features both single-player and up to two person local co-op gameplay. In the game, players lead a trio of heroes from the Mario Universe and four Rabbids, who don the attire of the former, to outsmart unpredictable enemies and solve puzzles along the way, which makes for a surprisingly challenging, humourous and rather fun game which can be enjoyed by all ages.

When first introduced, the combination of the Mario universe and that of the comedic, yet chaotic Rabbids seemed like a completely bizarre and implausible idea that would never gel well. However the positive praise that the game has received upon release is 100% justifiable as both Nintendo and Ubisoft fans were treated to a game which completely detracts from the characters as we know and love them, thus providing an all new experience for gamers to enjoy.

The game’s plot is rather interesting, with an opening sequence depicting a young inventor and her VR headset, which is capable of merging two objects together. In come the Rabbids who appear out of thin air in a time-travelling washing machine. They stumble upon the helmet and chaos ensues as they activate the helmet’s merging capabilities and combine everything they lay eyes on. This results in a Rabbid dressed as Luigi, another as Princess Peach (who totally comes with her own diva attitude), another as Donkey Kong and some much worse. 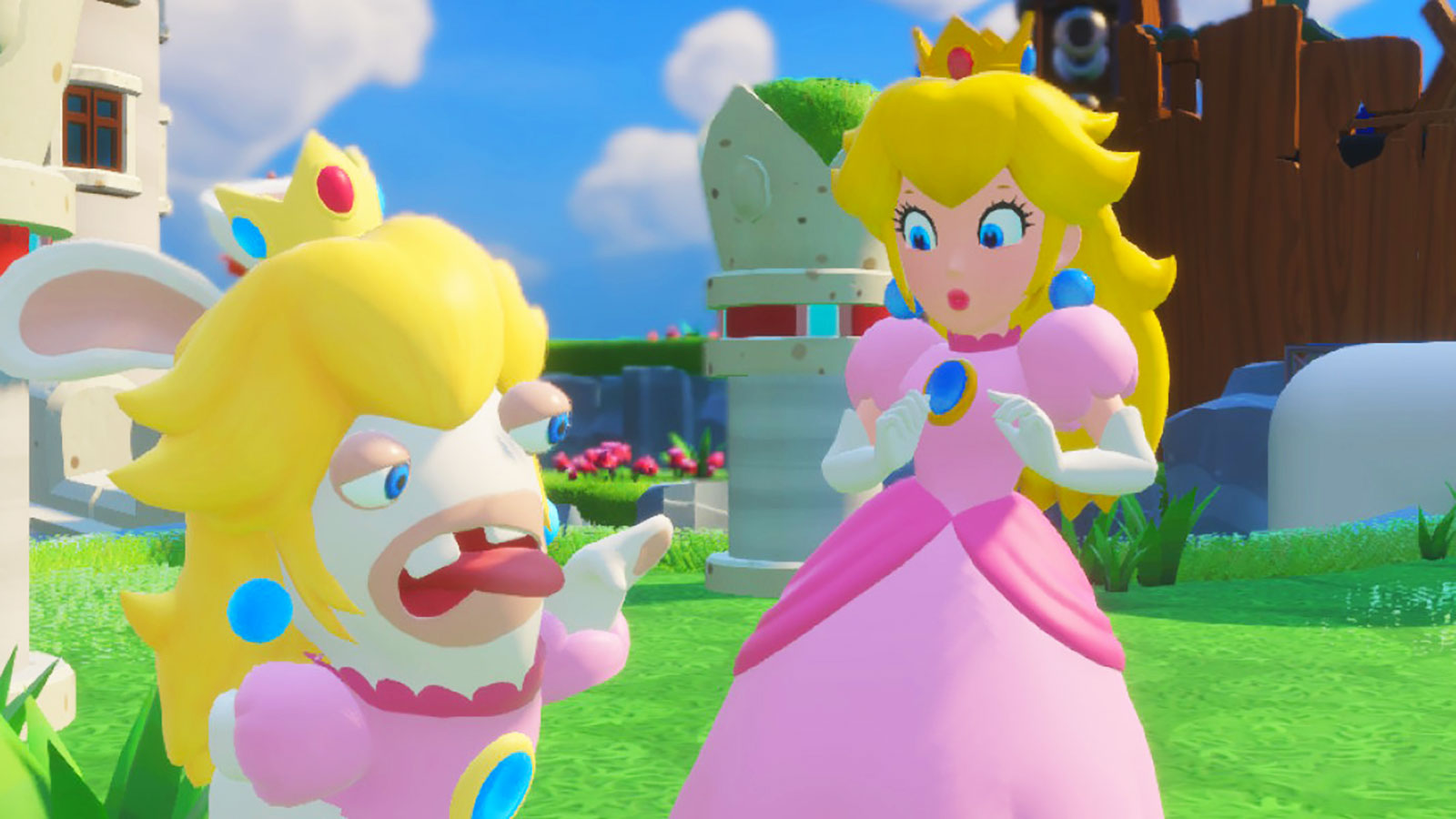 The Rabbids then find themselves in the Mushroom Kingdom and those dressed as the Mario heroes join forces with the Italian ‘plumber’ (though he is now confirmed to not be a plumber at all) himself, Mario, to prevent further chaos and destruction.

This narrative is carried out through child-friendly dialogue and several attempts at humour that both kids and their parents can enjoy. Together with the vibrant, cartoon-like world, the game can almost come across as being a game predominantly for children. While children may take an interest in a game such as this, there’s much more to Mario + Rabbids Kingdom Battle than meets the eye.

Despite it’s bright, candy like colours and cartoonish animation, the game requires some degree of skill and comes across similar in style to the likes of XCOM, which shouldn’t act as a deterrent to newcomers as the game is accessible and easy to get the hang of. However, it’s important to note that the complex battle systems of the game does mean that each level becomes increasingly more challenging than the last.

Unlike other strategic, tactical games, however, Mario + Rabbids Kingdom Battle introduces newcomers to the genre by focussing solely on the core combat mechanics and some minor puzzle solving, doing away with base building, numerous choices, permadeaths and other such distractions, which can often be found in games like XCOM.

The key to success in this game is making the right tactical decision, which largely involve team maneuvers, such as selecting which team member should jump ahead first and how they will then assist their teammates. An example of this would be to send Rabbid Luigi forward to act as a springboard for Mario, who can then perform his butt-stomp ability to stomp out the enemy.

In many ways Mario + Rabbids Kingdom Battle acts as a great introduction for those interested in strategy and tactical games, regardless of age. It’s vibrant colours, slightly comedic characters, challenging gameplay as you level up, all add to the exciting experience that comes with the game. What was initially thought of as a disaster waiting to happen turned out to work extremely well, even seeing Mario handling weapons didn’t detract from the lovable character and personality of the character. Ubisoft has successfully managed to do something not many others have with Mario + Rabbids Kingdom Battle and they should be proud.