What does it take to be a hero? In most fictional depictions, a hero is someone who possesses superhuman powers and fights for justice because of a higher calling or greater sense of purpose. A true hero, however, doesn’t need superhuman powers to fight evil and save the day. Sometimes all it takes is just hard work, dedication and one punch.

One Punch Man, a popular anime series which began as an ongoing web-comic, took the anime and manga world by storm with its revolutionary idea of what it takes to be a hero. First airing in October 2015, the 12 episode long, season 1 of the anime introduced the world to Saitama, an average man with superior strength who only seeks to be a hero for fun but is caught in a series of unfortunate events in which he ends up having to save the day. 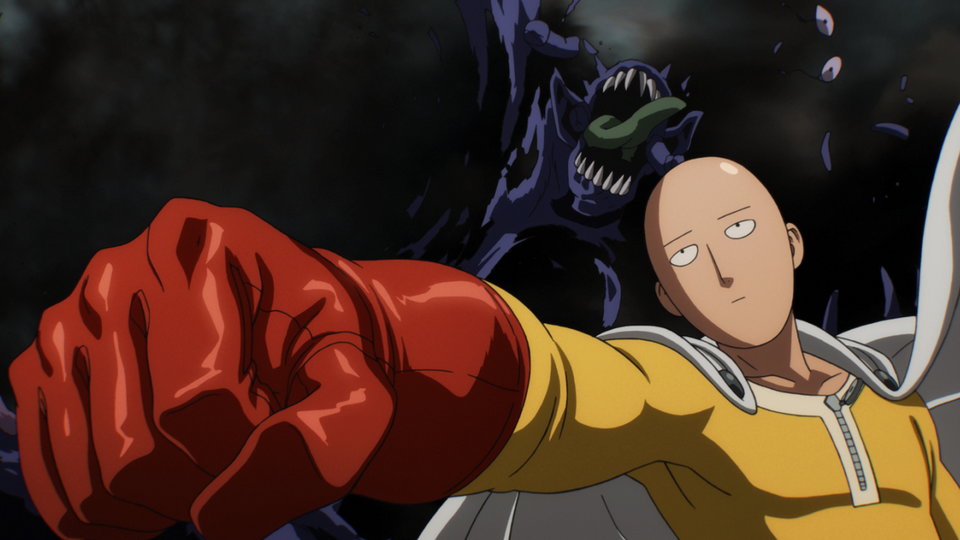 Being a non-conformist and a slightly clueless character, Saitama fights off baddies that threaten City Z, the city in which he lives, in nothing but a yellow jumpsuit fully equipped with a white sheet as a cape, red gumboots (a.k.a wellies) and red kitchen/bathroom gloves. Despite his goofy looks, this unusual modern day hero is a man with an admirable attitude and dedication toward his craft. Unlike his Western counterparts who receive their gifts by way of accidents, using advanced technologies or being born an alien, Saitama’s powers stem from hard work. As a character who constantly tries to push himself, it is only fitting that he would challenge himself to fight evil monsters and creatures that are equal, if not more powerful, than he is.

In simplified terms, Saitama essentially is a doofus with brute strength and exceptional will power. Throughout his journey toward finding his equally matched foe, he meets various other heroes along the way, all with some special form of ability that technically should surpass his own. It is here that he meets Genos, a super powered cyborg completely taken with Saitama’s ‘supposed’ prowess. The relationship that this pair develop will leave you chuckling often, especially due to the peculiar teacher/student dynamic that the pair get themselves involved in.

One Punch Man takes the mickey out of other well known action-adventure anime with its character and narrative exaggerations. Each episode of the anime is laugh inducing and certainly lacks an emotional pull as even during slightly emotional scenes, something rather weird will blindside you and happen without notice, throwing your sensitivity off guard and leave you either bewildered or laughing on the floor.

If you’re watching this without paying close attention, then it will be difficult for you to take One Punch Man seriously. The animation style is very much similar to that in the web comics and manga, which means that there will be certain scenes that are just hilarious. However, upon listening closely and truly focusing on Saitama, you’ll learn that there is a much deeper lesson to be learnt. For starters, Saitama is a good example to encourage audience members to persevere. Despite all obstacles hindering your progress, Saitama teaches us to never give up and to learn ways around the problem. For example, he tells us that “if you really want to become strong, stop caring about what others think about you. Living your life has nothing to do with what others think”.

Not only is the anime style, characterisation and deeper meanings appealing, but the soundtrack is also particularly thrilling, with epic background music playing during key fight scenes. Add to that the hilarious dialogue and action scenes and you’ve got yourself a winning formula for an entertaining anime.

One Punch Man was certainly an anime I didn’t think I’d enjoy but was pleasantly surprised that I did. I often have the theme song stuck in my head (it’s brilliant) and imagine what it would be like if I did 100 push-ups, 100 sit-ups, 100 squats and a 10km run everyday.

Get excited because Season 1 of One Punch Man is now available on Blu-Ray and DVD.